Are ya having a problem with your rig? We'll try to help. Share your tech tips and experiences here. Dr. Billy Glaser, author of the "Unofficial 750 Ural Service Manual" site myural.com, is moderating this section.
Forum rules
Here is the place for you to ask questions about or share your experiences about servicing or repairing your Ural or Dnepr. Please post topics concering modifications or accesories in the "Modifications and Acessories" section. Please post oil related questions in the "Oil Threads" section.
Post Reply
7 posts • Page 1 of 1

Claus and Snakeoil to the Bat phone please! Buddy of mine bought a 95 ural 1wd, 2 tone hasn't run since 2014 will do the usual fluid changes, carb cleaning etc etc! I myself own a 97 sportsman, has mikuni carbs, told him we will run numbers to make sure motor is 95 year, I myself run the ducati ign and Denso alt after both original units failed, he will prob want to try and run what he has, is it a grenade alt on his 95? And if it fails at one point is there a decent replacement besides the expensive Denso? I wouldn't steer him any other direction than the ducati ign, feel free to chime in guys
Top

I don't think a 95 will have the grenade alt as orig equip. I think it wasn't used till late 98? Stock 95 should be the G424 alt. Not mega watts output but adequate for the era and a better reliability rep than the grenade. Orig ignition will be a points system.
Joe
014 GU
"I'm lost but I'm making good time."
Top

Original ignition on a '95 will be electronic Type 1 and alternator will be G-424.

I wouldn't change either unless they failed. I have tons of new old stock spares for Type 1 systems, if he wants he can have them for the price of shipping.
'14 Gear Up
'02 Patrol
'00 Bavarian Classic
'09 BMW F800GS
Top

I'd say they're more reliable than the "early" elec ign systems Ural used. A bit more maint/servicing, but easy to do and keep up on even in the field. If it were my bike I'd keep the points. At least get it running good first before putting money into an upgrade.
Joe
014 GU
"I'm lost but I'm making good time."
Top

I'd say they're more reliable than the "early" elec ign systems Ural used. A bit more maint/servicing, but easy to do and keep up on even in the field. If it were my bike I'd keep the points. At least get it running good first before putting money into an upgrade.

If it's an export bike it won't have points.

These "type 1" ignitions weren't perfect but they were simple and the under-seat module stayed nice and cool. The diodes are the most common point of failure but are easily replaced.

Original ignition on a '95 will be electronic Type 1 and alternator will be G-424.
.

Correct. My 650 Ural is a 1992 domestic model I bought from the shop in Russia. It had Pekar K65 carbs, G-424 alternator with extern electronic regulator and Type 1 electronic ignition.
The alternator was running many years without problems until i fried it due to a defective battery. After that point I struggeled with the poor quality of chinese and Ukrainian parts and tried the grenade and several G-424 alts before moving to a German made Denso conversion (new adapter with pre used Kawasaki Denso alternator) this is working without problems since more than 10 years.But it won´t fit without giving the air filter housing a new shape

The Type 1 ignition was always an issue on my bike (where I first named the carbs to be bad). After switching to a Dnepr contact an breaker ignition problems were gone for a couple of years. Meanwhile I had a Boyer-Bransden ignition working quite well and in the moment I run an analogue Type 2 Russian ignition since appr 10 k miles. 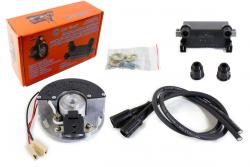 The k 65 carbs are quite reliable as long as one is willing to rebuild them from time to time.
I have Dellorto carbs on my bike now. Started at 3rd kick after installing and runs great with a much better gas mileage.
I had K 68 carbs on the bike the last 15 years but sourcing quality parts became difficult so I quit with them.

I would try to run the bike as is after the mentioned carb cleaning and fluid change. Once problems occure with the carbs I would try the mikunis you´ve got, because they are affordable and can be set up like your carbs. So no risk of tinkering about for weeks. Just copy what you´ve got.
The alternator should do for quite a while, the regulator could be swapped to something else if necessary (for example BERU GER 024, part No 0 190 005 024, no generator lamp working with this regulator but a voltmeter at the handle bar would give better information anyway)
I personally would swap the ignition coil for something else, as long as it´s the original bandaged one. The black box under the seat sometimes becomes defective, because the components vary in quality. Ride it as long as possible and then try something else. (Type 2, Ducati , points and condenser or what you can find or want to afford)
Take the fan housing of the alternator apart and check the fan screw for tight fit. It comes lose sometimes and falls off. Doing this, it´s easy to check drive gear for correct backlash (move fan left and right and rotate crank by kicker lever to make sure the backlash is 0,2 to 0,3 mm on every crank position. The alternator can be set by losening the two 17mm nuts and rotating it in it´s seat. CCW is lose and CW is tight. Always check with fastened nuts)
owned bikes: 93 Ural rig domestic model, 95 Suzuki DR 650 RSE, BMW R100GS, Suzuki GSX1100G rig, BMW R100R rig with Ural sidecar, Ural rig with BMW drivetrain under construction,
Top
Post Reply
7 posts • Page 1 of 1