Are ya having a problem with your rig? We'll try to help. Share your tech tips and experiences here. Dr. Billy Glaser, author of the "Unofficial 750 Ural Service Manual" site myural.com, is moderating this section.
Forum rules
Here is the place for you to ask questions about or share your experiences about servicing or repairing your Ural or Dnepr. Please post topics concering modifications or accesories in the "Modifications and Acessories" section. Please post oil related questions in the "Oil Threads" section.
Post Reply
17 posts

One of the things done is a NOS (New Old Stock, ie original but unused) MT-9 gearbox with a little star on it that my supplier told me meant it was originally meant for the soviet army (anyone know if that's true, or he's just spinning me $#!+?) was put on, replacing the Ural gearbox that had been on it.
Otherwise, engine largely untouched, except for fixing an oil leak. NOS generator to replace the 12V car alternator someone previous to me had put on it...replace the front mudguard, front tyre, front axle, free-up and lubricate the forks...etc...

Anyway, took it for a test-ride.
It changed into 1st so quietly I didn't even realise it had at first, I rode it for about 20 metres, then changed into neutral, and back into 1st...and then it started making a horrible grinding noise, as if it wasn't in gear properly. I changed back into neutral, the noise stopped. Back into 1st, the noise was back. Up into second, still the horrible noise. Later I tried reverse, and the noise was still there.
All this is with the clutch on, although I also released the clutch when in reverse. The noise was still there.

Korto Hi. The star mark is true, was deemed to be the highest quality and reserved for the military. Sounds like it could be the clutch pushrod bearings,Sounds bad but its a 20 minute job and cost no more than £10.00
Is the noise there In NEUTRAL with the clutch pulled in ? I would check those bearings anyway .
mike
Top

We're in the middle of the kids' quiet time, before we put them to bed, when it suddenly hits me that if the bike is in gear, the clutch is pulled in, and the bike is stationary, then the gears are locked to the wheel, and nothing inside the gearbox is moving. It couldn't be the gearbox! It couldn't be the engine, either, or it would always be making the noise. It's got to be the clutch!

So your idea sounds good. Particularly since if it's that thrust bearing, I may not have to disassemble the whole frigging rear end to get to it.


While I've got people's attention, there's another matter. While the bike starts and runs OK, I notice the choke has absolutely no effect upon it, cold or hot. This is weird, because it had significant (and the expected) effect before, but then I had to adjust the throttle cables and retune the carbs, and now it has none. I must have disturbed something. It doesn't seem to require any ignition advance to start, either.
Australia, Newcastle. 1972 Dnepr MT-9... mostly... I think...
Top

No supposed to. Assuming you have a manual adv-retard control? When starting you want to retard the ign timing.
Joe
014 GU
"I'm lost but I'm making good time."
Top

rivers wrote: ↑
Fri Aug 10, 2018 12:11 pm
No supposed to. Assuming you have a manual adv-retard control? When starting you want to retard the ign timing.

OK, retard then. All I know is I'm supposed to need to pull the little lever to change the timing for starting, but she don't like that. She don't like that at all. That lever is to stay untouched.
And like I said, the choke now does absolutely nothing; hot or cold engine, it's having no effect.


I pulled out the thrust bearing and had a look at it, and it seemed to be OK. Well, more exactly, I pulled it out, promptly dropped it into the dirt, sighed, w@$#ed it out in petrol and sprayed it with WD 40, then checked it. It was a bit sticky at first, but all the balls soon started rolling about freely.
So I stuck some grease on the thing and stuck it back in today (in the absence of any immediate replacement), and gave the bike a test-ride.
The noise is still there. It's only there when the bike is in gear AND the clutch is pulled. As soon as the clutch is fully released, it goes away, and it's not there when the bike is in neutral and the clutch is pulled.

Sounds similar to when the teeth on my clutch plates became Dracula fangs vs. flat on top - high screeching when in gear.

When you were working on the tranny, do you remember what the clutch plate teeth looked like?

If they were pointed, you’ll get a chance to gain more knowledge on how to remove a transmission

A Dnepr has a pin clutch, different than a modern Ural, comes with it's own issues, such as worn pins.
A can of silver spray paint and a star stamp will run about $10, to some questionable sellers, that would constitute a "Rebuild" and upgrade.

jaybird wrote: ↑
Tue Aug 14, 2018 11:07 am
A Dnepr has a pin clutch, different than a modern Ural, comes with it's own issues, such as worn pins.
A can of silver spray paint and a star stamp will run about $10, to some questionable sellers, that would constitute a "Rebuild" and upgrade.

Struggling to find info about this (?)
Mike H
2016 Ural cT, in glorious terracotta
(aka Oranzhevaya Opasnost, "The Orange Peril")
Top

jaybird wrote: ↑
Tue Aug 14, 2018 11:07 am
A can of silver spray paint and a star stamp will run about $10, to some questionable sellers, that would constitute a "Rebuild" and upgrade.

This is true, but there comes a time when you've just got to trust your supplier. I dropped one or two who I didn't, but I like Magnus. He's given me no reason to not trust him, and a few reasons to trust him.

Anyway, I pulled the gearbox off to expose the clutch, and this is what I found: 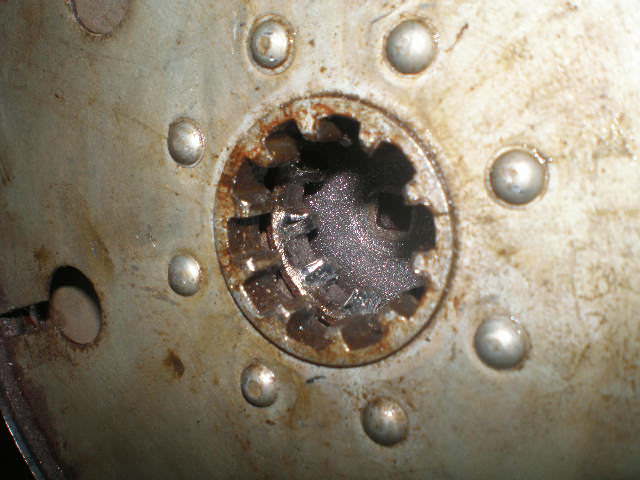 The teeth on the inside disk there looked very shiny, and felt quite sharp and jagged to the touch. I also notice they're not lined up with the teeth on the front disk, although that may be due to pulling out the shaft, for all I know. I've never fooled around with a clutch before.

I have no idea what I'm doing, but I'm going to do it anyway.

Here's the gearbox. It's a bit blurry. I didn't notice the camera had focussed on the wrong part. 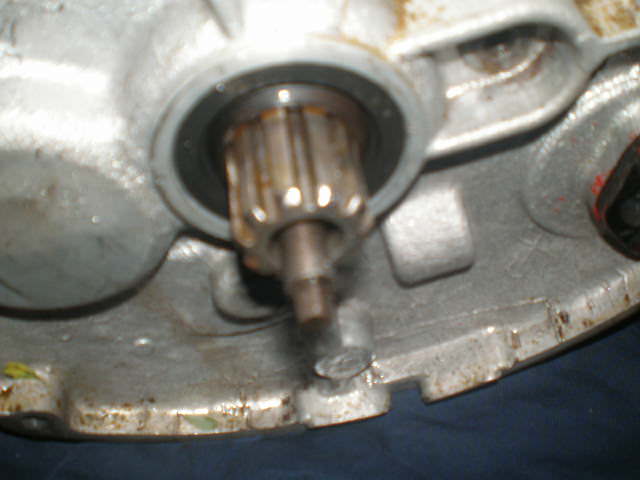 It looks fine to me, to be honest. And the end of the push rod looks good, too.

Incidentally, as I said I never fooled around with a clutch before. What tools would I be looking for to disassemble and assemble it?
Australia, Newcastle. 1972 Dnepr MT-9... mostly... I think...
Top

Does seem like the front plate is no longer gripping the shaft. So what Lokiboy said. Not uncommon I'm afraid.
Mike H
2016 Ural cT, in glorious terracotta
(aka Oranzhevaya Opasnost, "The Orange Peril")
Top

John
The Ural's made Maine a much bigger state.

cateyetech
Hero of the Soviet Union - 2020

If I am wrong, someone will say so

Oh, what the fark?!
I am going to hunt down and kill whoever the arsehole was who had this bike before me!

Some of his innovative solutions were amusing, like how he had decided to convert it to 12V, so he put in a car alternator, and hooked it up to the gears using a bit of garden hose as a universal joint. Amusing. Would never get past a blueslip inspection (roadworthiness inspection for unregistered vehicles to become registered), but amusing. Others not so amusing, like since he apparently didn't have an M8 fine nut to go on a engine case stud, he decided to use a metric coarse threadcutting nut instead, and totally screwed the thread. I was not happy when I discovered that.
Australia, Newcastle. 1972 Dnepr MT-9... mostly... I think...
Top
Post Reply
17 posts