Keeping It In The Family

Here's a place for the group to discuss their other brands of bikes, hobbies, and personal interests not related to Ural & Dnepr Sidecar rigs. But not politics...
Forum rules
Here's the place to chat about off-topic stuff, hobbies, and other toys you got. No political posts, they will be deleted and the poster warned. We're not always "politically correct", but the Steeds site is apolitical.
Post Reply
26 posts

We've had our first few hiccups now.
Do not trust the gas gauge. At least until I get it straightened out. Ran out of gas with the gauge showing between a quarter and half. Glad I was just down the hill from the house.
Bouncing on the trailer for over three hundred miles also appears to have knocked something outta whack in the transmission, no upshift to fourth, no oomph getting on the ramps. So, Saturdays plan is to attack the transmission with a test light and pressure gauge. As it took a running start to get the car up on the ramps, I'm guessing that there is either crud on the seat of the relief valve or a shuttle valve is hanging up. That's enough to cause both problems.

I won't go into the headaches the State of Illannoy is giving me with title and tags.
cheeseheadmike

Just noticed the SUN VISOR, those were wonderful, but they did rather limit vision of hanging traffic stop lights. They made a cool accessory for that. It is a decorative chrome stalk wit a clear, wide angle PRISM on top - made to mount on the dash - to show traffic lights. First time I saw one - I thought the plastic Madonna had been replaced by a new age Alter. Seriously, they do work & look cool, if you hunt, they can still be found.
Current Motorcycles: Improved 2002 Ural Tourist.

"Be who you are & say what you feel. Those that matter won't mind, those that mind - don't matter."
Top

Mike you might get lucky with the fuel gauge? I've had a buncha old cars that have been siting for 10-30 years etc. Especially in humid areas like IL the float/sending units rust up and stick. Very often a spirited ride on a bumpy dirt road frees them enough to be semi-accutate again. Not like you don't have room in the trunk for a gas can.

Got no idea on the goofy semi-auto trans w/ clutch but those thing were freaks when new. Cool car, have fun.

Yeah, the car sat for months so I'm guessing the float is stuck. At least in the down position, gassing her up brought the gauge back to full. The trans isn't out of my league, it's just a two speed gear box with two ranges in each gear. Shifting is electric over hydraulic using 1940s technology. I've found Dads' Service Manual and have been laughing at the 40 to 60psi needed to move the shuttles. Most stuff I work on uses up to 6000 psi to make magic happen.

This is the fourth antique car I've had. It is the oldest and first I've had that is finished and also has a provenance, such as it is. My last one, a 1952 Ford F2 pickup, I passed on to my youngest daughter and son in law after I got a promotion at work and free time disappeared. That one was my hot rod and is a sleeper. Looks like hell, but has the original 215 six cylinder built to pump out double the original 90HP. Jake has done a bit more work on it and it may be close to the 200HP mark now. That old Ford has one of those prisms on the dash, Jake hangs his hat on it.
cheeseheadmike

Transmission issue is gone. Not a hundred percent sure of what I did, but I think that it is the first time the transmission has shifted correctly in forty years. Took Mrs. Cheesy on a fifty miles drive yesterday and never missed a beat. Or a shift.

And here I thought that piloting a Ural built upper body strength. Quite a workout on our curvy back roads.
cheeseheadmike

When I was a kid, my father had the Dodge version of your car as a work car.
Dave

It's kind of odd that my Dad went for a Chrysler product when he got it. And how he got it. He spent thirty years at AMC and shut the door behind him when Chrysler bought them. He is Mercury/Ford guy at heart, especially for the 49-51 models and Rancheros. He still has a 68 Ranchero at the house.

Turns out that about 50 years ago, the Desoto had been stolen, recovered, and unclaimed. It ended up being sold at a police auction and was bought for $25 by a guy I went to school with. He got a new title for it and it sat in his garage for quite some time. In 1978, Dad was told about an 'old car' someone wanted out of their garage, so he went to see it, offered $125, and brought it home the same day.

My not very pregnant wife and I happened to stop by the following weekend. I spotted the car through the kitchen window and asked my Mom, "What the hell is that?" Mom sort of sighed and told me, "Oh, that's your Fathers' goddam new project he doesn't have time for."

It was several different shades of graffiti and primer, had a couple of broken windows, missing trim and hubcaps, and a mix of different size tires. But it ran.

I asked Dad why a Desoto, and he shrugged, said "It spoke to him and it pisses off your mother. What other reason do I need?"
He also reminded me that his Dad had a 1956 two tone blue Desoto that he was rather fond of. I remember that car, it was sharp.

By the time my oldest daughter could walk, she'd be out in the garage with my Dad, "helping" with the rebuild. Her help probably added a year to the job, but she's a pretty good wrench in her own right, now. Someday it will be hers.

I did wrench my back lifting a heavily undercoated fender off of it, so we have a slight history together.

Success. Titled, plated, and insured. Also did something I swore I'd never do and sprung for vanity plates. All in time to park it for the winter. The Ural is more fun in the snow, anyway.
cheeseheadmike

Illannoy is slow, but usually comes through. Got the plates. 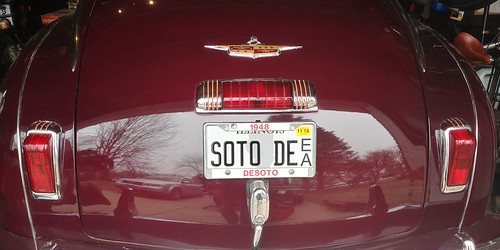 So, the old girl has been somewhat of a PITA over the last year or so. Dad said it always ran kind of hot so he put a 'parade' fan on it. Well, 'kinda hot' became overheating, badly, in less than five miles. Back flushed the cooling system, boiled out the radiator, replaced the water pump, to no avail. I asked my Dad if he'd ever done anything with the water distribution tube (wdt) in the block behind the water pump. He didn't even know what I was talking about. As the wdt was the only thing I hadn't messed with, I ordered a new one WAY back in September.

I have been more or less on the road for work since January.

If I get home home for the weekend, I usually roll in after ten pm on Friday and spend the rest of the weekend fixing stuff that went to hell while I was gone. For the last two weeks I've been lucky enough to 'work' from home so I have caught up on all the Honey Do projects and was able to start doing some of mine. Finally caught up to the DeSoto

Fast forward to yesterday.
Solved the overheating problem. See that goofy looking hole on the left. That's the wdt inside it. The sides should be flared out to the sides of the hole it's in, not scrunched like it is. 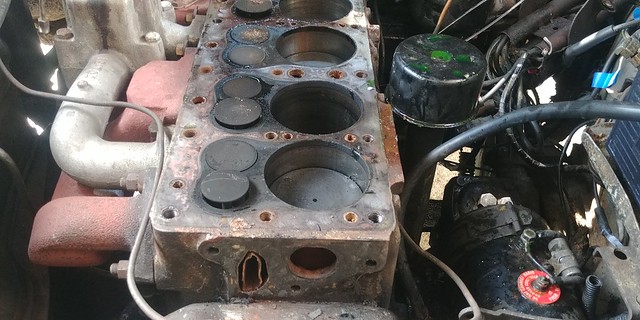 Coolant is supposed to flow through the tube, not mosey around the outside of the it. I'm thinking this was a replacement tube installed, poorly, before Dad bought the car.

I pulled the tube out and also found a wad of black RTV plugging the port for the number six cylinder. I reused the old tube because, once cleaned out, it was in decent shape. Also, the tube I bought back in September was for a different Mopar engine. Got everything back together this morning with new gaskets and cleaned surfaces. Mrs. Cheesehead and I went for an extended lunch ride in it and ten miles at 60mph saw no more than 180F. I bet I put almost 70 miles on it today.

Heading for the largest car show in NE.Illannoy with it on Saturday.
cheeseheadmike

Return to “The "Other" Toy Box”