WHat would YOU pick?

Welcome Comrade! Pull up a barstool and order yourself a virtual vodka or Baltika and enjoy the camaraderie of other Soviet bloc bike enthusiasts. Nastrovya! This is the place for generic conversations about bikes and life in general.
Forum rules
This is the place for general discussion about motorcycles and life in general. No political posts. Use The "Other" Toy Box section for other bikes, guns, collectibles or hobbies.
Post Reply
45 posts

WHat would YOU pick?

While I HAVE taken my cT off-road, I spend 98% of my riding time on asphalt or gravel roads, so the cT, with its better handling, is the obvious choice for a rider like me.

In addition to the above, I've fallen out of love with the ElectroJet EFI and its shortcomings, which would make the great-handling 2019 cT, with that that sweet, sweet Keihin EFI system, a no-brainer.
- Chad

harryball
Hero of the Soviet Union - 2020

I prefer the 2WD for our PA winters, also, coupled with the fact that I do venture off the tarmac occasionally. 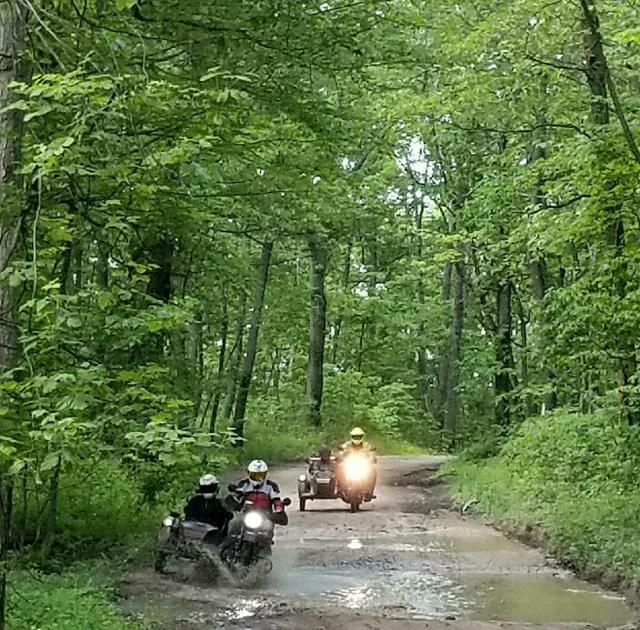 stagewex
Hero of the Soviet Union - 2020

I have a "carbie" so was never moved to ramp-up to an EFI after test riding one when they first came out in 2014. Disappointing.

Now with the Electrojet EFI system abandoned by IMZ the next phase of beta-testing continues. But Keihen and their system and company has already been proven on a bunch of mainstream brands so barring some other new mechanical issue... the 2019 over the 2018 is a no-brainer no matter what model.

Personal preference any year would be a Gear-Up over a CT but if you don't have plans on going off-road often then a CT is just fine.
I love having 2-wheel drive but it's overrated as a "must have". Good to get ya out of trouble but can get you onto it as well.
Stagewex

List what you "have", keep the others in your precious memory bank.
Top

If there are no dogs in Heaven, then when I die I want to go where they went.
Will Rogers
Top

jeffsaline
Hero of the Soviet Union - 2020

Jeff
Jeff Saline
2010 Gear Up
-Good, Fast, Cheap. Pick Two
-Just because something isn't true, no reason you can't believe it. Hub McCann Second Hand Lions
-Anything is possible if you don't know what you are talking about.
Top

2019, all the latest improvements. If similar price, no contest.
Mike H
2016 Ural cT, in glorious terracotta
(aka Oranzhevaya Opasnost, "The Orange Peril")
Top

Everyone forgets one of the biggest perks to 2wd.... pointing out the sidecar driveshaft to UDF'ers

Do you intend to ride all year long? I recall there is some serious white stuff called "snow" when living in Green Bay. @WD may be worth it, JMO.
I live in mountain state and like to ride out in the snow - just to go to the store for something and, of course, to boggle peoples' minds!

The first choice is not the year as much as what you will do with it.

cT is suited better to full time road running by a significant percentage. If that is all you do then the cT 2019 is a slam dunk. That includes gravel (I am so looking forward to gravel stability!), potholes, hard packed forest train road etc.

On the other hand, the 2WD has its plus if you are into the off road adventure end. Muddy, rutted, water crossings (2 is better than 4 in not loosing traction). I suspect a cT can do most of what most people do on back roads but its not going to be as good in the sand and muddy stuff.

Keep in mind that 2WD is no good on ice, snow yes, but icy roads and no differential at any speed over 5-10 mph are not an application.

The 2018 FI is probably at least ok, with the off road map livable.

Kind of Oranges and Bananas though, you have to decide which fruit suite first then go for it.

windmill
Hero of the Soviet Union - 2020

I picked an 18 over a 19 because I wanted an M70, and didn't want to wait nearly a year. Personally I like 2wd, and occasionally miss not having it on the M70, but the rest of the time I prefer the handling of my M70 over my Patrol. The extra power and throttle response of a 19 sure is sweet, but maybe not a big enough difference if your're heart is really set on 2wd.

That would be a tough choice for me, a color preference could be what tips the scale.......
Barry

"Take care, sir," cried Sancho. "Those over there are not giants but windmills".

Return to “The Virtual Watering Hole”